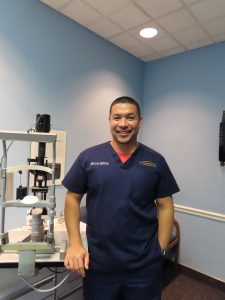 Dr. Calderon received his undergraduate degree in Micro Biology and Cell Science from the University of Florida. During his time at the University of Florida he became active in the community by volunteering in the eye clinic at the local VA Hospital. After receiving his first undergraduate degree, he continued his professional pursuit of becoming an optometrist by attending Southeastern University College of Optometry (NSUCO). While at NSUCO, not only did he receive his second bachelor's degree from Vision Science but he also became president of his graduating class and president of the Florida Optometric Student Association. After completing his Doctor of Optometry in 2015, he went on to The Vision Center of West Phoenix as resident optometrist.

Through his exceptional optometric experience, knowledge in LASIK and refractive procedures, we are able to provide the best care to our patients who are not only seeking medical eye care but also the latest in LASIK/Vision enhancements.

Dr. Calderon understands the importance of patient-physician communication and emphasis in excellence in patient care for the Tucson community.